Today, the Second Session of the HTS / CCI Trip spent the day in Tianjin viewing Half the Sky’s Tianjin Programs. A couple years ago, it might have taken us up to two hours to get from Beijing to Tianjin by train, but with the construction of the high- speed railway, it only took us a short thirty minutes.

When we arrived in Tianjin, we made our way straight to one of Tianjin’s Social Welfare Institutions. There, we were able to visit Half the Sky’s Infant Nurture program as well as the Preschool Program. The Youth Services program would have been there as well, but they were on a retreat to another province. Half the Sky also has a Family Village program in Tianjin. This program provides children that meet certain criteria with permanent foster families.


It’s been an eventful few days on Session Two.

Yesterday we had our showing and discussion of Somewhere Between.  It was really cool to watch this movie with our close knit community of adoptees. Today, our activity is one of slowing down and watching – we are to take ten minutes to observe a specific scene and analyze how our own personal and cultural biases color the way we view it. It’s an exercise in perspective, but also an interesting way to look at our own role as an adoptee in China. 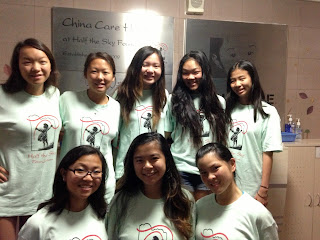 In between discussion and volunteering, we also took time to sharpen up our bargaining skills at Beijing’s Pearl Market, a popular shopping destination for tourists with everything from souvenir magnets to high-end pearls. Shopping at the Pearl Market is certainly an experience to say the least, especially to those who had never been there. Shopkeepers are often pretty aggressive business people, but in an entertaining way and bargaining often becomes fun.

Often shopkeepers will yell out to buyers, “hey lady!” or “pretty girl” or something like that, and then follow that with “want watch?” Their English is broken, but fairly workable in practical context. They will try to grab foreigners the most – which is an odd situation with us. Shopkeepers think we’re Chinese at first glance, but once we open our mouths, it becomes very obvious that we are actually American.

A couple of shopkeepers have stopped to ask us what country we are from. Usually it’s a pretty familiar conversation by now – where are you from? America. But you look so Chinese.  Yeah. Are you Chinese American? Sort of. We’re adopted from China. And then the responses vary, but we’ve gotten everything from “You’re so lucky” to questions about our parents in America. In my opinion, no Chinese views of adoption are the “standard”– the views are as diverse as the experiences and feelings of adoptees ourselves.

We plan on going to either the Olympic village area or Sanlitun and the Great Wall later on in the week. Keep your eyes open for more updates!