We've just been contacted about by Chinese adoptee and RISD Junior Robin about an awesome project that she is leading!
In her own words (and pictures!)...
"Letters for Them is an ongoing project I started at the Rhode Island School of Design (RISD). I was adopted from Hefei, China in 1994 at eight months old. I am currently a junior at RISD pursuing a BFA in Graphic Design. I'm constantly looking for ways to explore my personal history in my work. For a while now I've had this idea...

It all began when I found some old drawings I had made as a kid (maybe six or seven years old). They were letters that I had written to my birthparents when I was first beginning to understand where I came from. They were never sent as neither I nor my mom know my birthparents nor had any way of contacting/finding them.  We went back to China between my senior year of high school and my first year at RISD. While there, we were able to visit my orphanage, which has since changed quite a lot. We saw my file, which like we had expected, offered no new information as to who these unknown people were/are. Since then I continue thinking about what I'd want to say to them if I ever did have the chance to meet them. Letters for Them came as an idea that perhaps other adoptees think about this as well. Wouldn't it be cool if we all had a common place to send thesetechnically unsendable letters? Thus, Letter for Them was born. 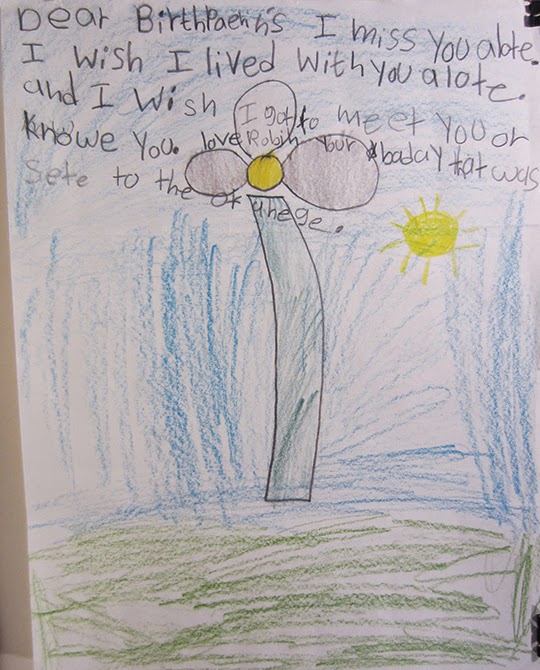 Letters for Them is an open invitation to any and all adoptees. No matter how old you are or where you were adopted, whether you know your birthparents or not, if you are an adoptee, you are invited to participate. This is meant to be a public, open space for adoptees to write to their birthfathers and/or birthmothers. The letters can be as creative as you wish; they may be simply typed or handwritten notes or they may be collages, drawings, etc. Another way to think about this: given the chance to say anything to your birthparents, what would you really want to say? What would you want them to know about?"

On May 1st the letters collected thus far will be made into a book for her family album class at RISD. Learn more about her open invitation on her website Lettersforthem.com.